I've been reading a lot about the new possible iWatch from Apple and thinking about what it might look like and provide in terms of features. 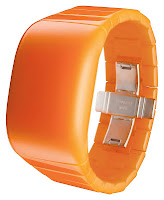 How big will the iWatch be?

Men's watches tend to be between 38mm and 50mm wide at the crown. For the iWatch to work - it will need to fall in this range.

Will there be a men's and women's version?

Given Apple's style centric design - i suspect that the answer will be yes... eventually. I'd be surprised if they can get the volume ramp up quick enough to support two substantially different sizes.

How will the iWatch strap/buckle closure system work?

I've got to guess deployment buckle - I can't imagine a rubber strap with a standard buckle closure holding on the cool new iWatch. Adding to this is the potential use of willow glass from corning. While flexible - i'm not sure I like the idea of glass anything resting directly against all the arteries and nerves under my wrist. I would guess that the glass part of the display will be topside - with the strap being made of a less expensive and more durable material with an adjustable deployment buckle.

There are several "techy" watches already available - interesting to look to see what has already been done and see where the iWatch might fit in.

Retro to the extreme this has a sleek futuristic/old school look and feel to it.

This is one of the watches I think might be a good model for the iWatch. Note the techy buckle closure system - and the very smooth nearly invislble display (or lack of). The iWatch faces a challenge in that most watches are essentially "always on" - in that you don't have to push a button or tap/unlock in order to see the time. Given the power hungry nature of the iPhone display - always on will be a challenge - particularly since the battery on the iWatch is going to be even smaller than that of the iPhone. The solution might be to use electronic ink for a time display - or perhaps have a segmented approach - where only a portion of the screen remains always on. The other option would be to have the display cycle on and off showing only times on the minute or 5 minute mark.

The Mutewatch requires a tap/swipe to turn on and view the display - then it has a series of programmable 'vibrate alarms'. Targeted towards public speakers who need a way to track time without having to look down. It also has a built in motion sensor so you can flick it to life. 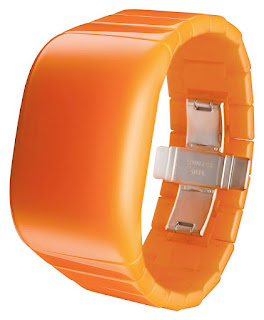 Love the look of this one - probably most closely approaches the iWatch in feel and design ethic. It does require a tap to turn on and view - but the display can be programmed to be either horizontal or vertically oriented. It is also (uniquely in this category) waterproof.

A laundry list of features I'd expect the iWatch to support.

1. an API. The iWatch will surely use a similar API as the iPhone - giving developers an opportunity to crush many competing devices. Wrist based GPS watches? Personal training timers? Remote controls for your TV?

2. Motion sensors.
3. GPS
4. Bluetooth
5. Vibration alert
6. GSM. Here is an interesting question. Will the iWatch be a stand alone device - requiring nothing more to support it - or will the iWatch require an iPhone to be proximate to it for use? Both options have their separate appeal. With enough volume I could see two models being available - much like an iPad with built in data plans.


No matter how the iWatch turns out I'm likely to line up to get one early - as long as they can keep the total size under 50mm. Even a geek like me would have a hard time pulling off a bracelet like device without feeling like I was wearing a superwoman bracelet... 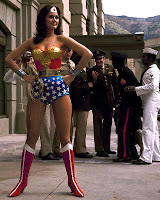