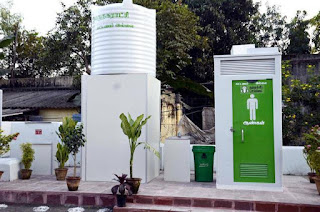 In the Southern Indian state of Tamil Nadu, five phones exist for every two toilets. Even in areas without toilets, a lack of understanding about proper use has led to 60 percent of the population practicing open defecation. This practice is so commonplace that most alternatives are widely rejected and are even seen as unnatural.

When UBS/Optimus extended an invitation to game developers to create a game that could impact this behavior and begin to promote toilet usage, I was immediately intrigued. Could I apply the same levers that I've seen work int he world of fitness to this problem? The result was a game concept that I'm calling "King of Thrones"

Basically I've taken levers like social inclusion and recognition, activity journaling and ownership and combined them into a "game" that can be thought of as Foursquare for toilets :-)

King of Thrones Use Case

Sam passes by a toilet station on the way home from school. Each day she checks in from her phone by pressing the check in button once when she enters the toilet and then again 120 seconds later when she exits. The GPS on her phone determines that she has complied with the rules of “check in” and awards her a point for that toilet session.
Her game screen informs her that she is on the way to becoming the king of this particular “throne” for the following month by presenting her personal avatar in a ranked fashion along with other toilet users. Since Sam has already used this check in procedure 5 times this month, each of her check in’s is now awarded two points – accelerating her ascent to the top of the ranking.
By the end of the month, Sam has been recognized as the official King of that throne and as such gets to choose the avatar that will appear on the toilet maps for that toilet, as well as the name of that particular toilet. Avatars and names are designed to tie into current themes and trends among the youth population and would include references to sporting figures, fantasy locations, movies and cultural icons.
Sam is also able to report on the condition of the toilet, call in maintenance or cleaning services or be compensated for personally maintaining the toilet herself.
Next steps?
Should this concept be chosen as a winner (a long shot at best) I'll have an opportunity to see it in action.
Posted by Bill P. at 1:23 PM No comments: